Inevitable, I guess. Large parts of the UK have implemented a hose pipe ban due to lack of water in reservoirs. Almost from the minute the ban was activated the rain has not stopped and now many places are under water with houses and businesses flooded. Apparently, the ground is now too hard for the rain to soak in and the run-off is “going to the wrong places”. Sounds rather like the wrong kind of snow and leaves on the track that brought British Rail to a halt a couple of years ago.

Here where I scribe in Romania we have seen temperatures above 30 degrees at the end of April which is about 10 degrees higher than last year. Are we due for a scorching summer in CEE this year? If so, will the beer producers be on top of their game to quench the thirst of the parched population? Well, I have no doubt beer will be produced in vast foaming quantities but will the associated Route To Market (RTM) be ready to maintain supply to multiple points of sale?

International Key Accounts (IKA) will probably have their act together to ensure they are well stocked should the hot weather hang around for a few weeks. Interaction with IKA can be easier than with distributors particularly if you are sending break-bulk to IKA logistics platforms. If Distributors are proactively managed as real partners in business development then you can be successful. 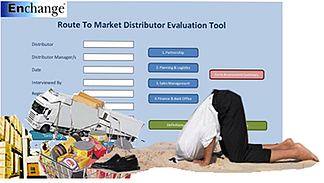 However, despite the distributor channel remaining sizeable, producers often fail to grasp the full opportunity their wide and deep coverage can provide. For large parts of Eastern Europe they provide significant sales outside the big cities and this rural reach should be valued as this population will not reduce that quickly particularly while the recession has its teeth firmly clenched on economies.

Before the season kicks in and the “best beer salesman in the world” is a daily feature in the sky you will benefit from taking a close look at how you interact with distributors and what you expect them to achieve. Treat them as idiots and you will get the associated response. Treat them as partners and an integral part of your business and you can jointly reap the benefits by keeping shelves and coolers well stocked.

Beer boys tell me that brand loyalty is more important but I don’t buy that and here is why. Imagine the sun is beating down, the hose pipe-ban continues, the ground is brown, dusty and dry and you have invited your mates around to watch the European Championship football. Your favourite beer is not available in sufficient quantities at the shop so what do you do?

A. Wait until your favourite brand is delivered.

B. Don’t buy any beer and treat the boys to a nice cup of tea.

C. Buy another brand and get it back home to the ‘fridge at top speed.