If you do not specifically agree on what is expected between two parties before you start a relationship then anything and everything but success is likely.

You buy a new car and you get a contract that tells you what is covered by the guarantee and for how long in time or in distance travelled. From your side you will be expected to pay the same people to periodically maintain the equipment at peak condition.

Travelling by air? You buy a ticket to Bucuresti and you know when and where it will take off and hopefully land you and how much baggage you can take. There are rules in place for delayed take off and excess and lost baggage. You might not like these rules but that is what you have agreed to by investing in the ticket. (Before you say it, I know certain airlines stretch the boundaries here yet people still fly on them!) 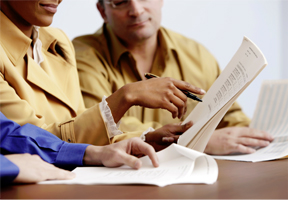 While it may not be as popular as it used to be, marriage is still perhaps the most widely used Service Level Agreement (SLA) in the world. The names of the two parties are made very clear to a number of witnesses and depending on your brand of religion there follows a list of statements you have to agree to or the marriage ceremony does not continue. You even get a certificate which is in effect a contract or your SLA. Of course, this does not go down the detail of who does the washing up or who gets up at 3am to feed the baby but it does set out clear expectations.

Should the husband run off with the woman for the chip shop then a divorce is highly likely. Think of the arguments about who gets to keep Eric the hamster if there is a parting of ways. Alternatively, you could use one of those “pre-nuptial” agreements favoured by plastic Hollywood-types who think a long relationship is several months in their world so far away from reality.

In all cases, it reflects “you scratch my back and I scratch yours” or sometimes “you stab me in the back and I take you to court”.

Despite SLAs being a vital part of daily lives why do FMCG. Brewing, Pharmaceutical companies fail to have the same in place for their suppliers, IKA/TT customers and internal departments within the S&OP framework? Such an approach holds people accountable for the service they provide and at the same time making the penalties clear in the event of failure.

SLAs do not have to be a lengthy tome of text but should contain enough information for both parties to be 100% clear about what is expected from the relationship. Include some relevant and why not stretching KPIs and you have the basis of a relationship that may flourish rather than end up in the divorce courts.

No relationship in business or in private life is perfect but why not start out by writing down what level of service you expect to provide to each other?