Top 7 Pitfalls to AVOID in S&OP

The Enchange Supply Chain House; the one-stop shop for all of the elements you need to achieve supply chain excellence.

In a previous article I discussed the top 10 tips to promote positive and productive behaviours within the S&OP process. Here, I take a look at the opposite side of the coin, what you must avoid.

I have been involved in many S&OP meetings as a facilitator, observer, participant and CEO. Every S&OP process is rightly different in each company and sector, but the basics remain the same. To recap:

Some meetings in the S&OP cycle are deadly serious affairs with strong and controlling leadership while others are jollier with team members encouraged to contribute the odd joke or anecdote in support of team bonding and morale. I personally prefer the latter as you tend to see far less use of damaging behaviour. 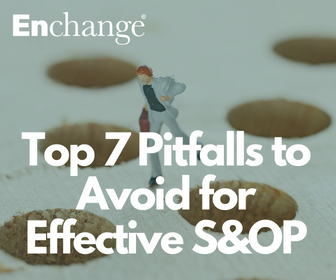 What sort of morale, process and performance damaging weapons can be seen in the worst examples of an S&OP process? Here is a selection:

1. Delayed Action Information Grenade. Usually deployed after 22.00 on the evening before the relevant S&OP meeting. Deliberately timed to provide no opportunity for debate or analysis before the information is revealed to the wider team and the CEO. Usually accompanied by the defensive “but I sent you an email” and much useless debate.

2. Silo Bomb. A common feature of imperfect S&OP processes where team working and collaboration is poor. When you cannot solve a problem simply throw the responsibility over the wall into the next department which harms S&OP and destroys any attempts at  team building.

3. Blame Thrower. As the name suggests, this weapon indiscriminately apportions blame to anybody but the person delivering the accusations. The usual outcome is that the thrower is really the one to blame and this tactic is used to divert attention from their own failings.

4. Bouncing Bomb. This is deployed far in advance of the meeting with the full awareness that a problem is coming which will explode much further along the process,  causing maximum disruption to the business without the chance of mitigation.

5. Err to Err Missile. A lethal weapon which fails to correct known errors within the process and sees them repeated time after time. Eventually the error, whether data, information or behaviour, can become embedded thus consistently undermining performance.

6. UxB or Unexpended Budget. A passive weapon where plans built on a certain level of market support have no chance of success when budgets are cut AFTER S&OP planning decisions have been made. Usually results in excess stock, lost sales and write-offs.

7. Unclear Bomb. Perhaps the most terrifying weapon of all and in frequent use in S&OP processes. This bomb is commonly deployed when participants have not adequately prepared for their part in an S&OP meeting. A lack of clarity in data interpretation and the resulting information undermines the process and in-market performance.

There are many more tactics available to cause mayhem and disruption in S&OP and they are used by all departments. Success comes only when the weapons are permanently decommissioned and colleagues start to 'prove people right' rather than work hard to prove them wrong. It certainly makes life a lot easier!

Read more articles on Supply Chain Excellence and Route To Market on our website where you can also subscribe to our frequent updates.

Finally, feel free to use any of our contact routes including Live Chat, if you have any questions about how the Enchange Supply Chain House can assist your journey to supply chain excellence.