Who is the stooge in your S&OP process?

Laurel and Hardy, Morecambe and Wise, Abbott and Costello, Little and Large, Cameron and Clegg. These are examples of double acts where one party plays the straight/stooge and apparently serious man while the other plays the fool/jester. I admit I am not too sure who is who in the last example.

Having suffered 2 weeks of UK television recently it was difficult not to see the latest popular double act of Ant and Dec popping up at frequent intervals. My jury is out on these two as they appear to be part of a TV talent vacuum presided over by a man who looks like a dark-haired Max Headroom – youngsters, Google it. I always thought Simon Cowell was that nice bloke who rescues badgers from drains in Surrey! 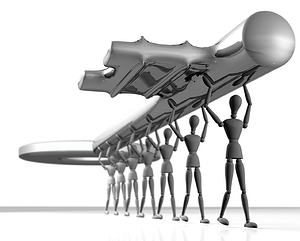 Anyway, the point is that these performers work through the contrast in styles and the way each party plays off the other to score points and generate laughs. For some reason the first name in the act title is usually the funny or less serious partner who generates the gags and generally puts down the straight man partner. This notation is also consistent with Sales & Operational Planning with Operational Planning being the collective remainder of your FMCG, Brewing or Pharma business.

Why do so few Sales people – senior and junior – get S&OP? In fact do any Sales people really get S&OP and recognise the process as one for common good in a company? If only there was a way of replacing sales bonuses with cross-discipline bonuses. While the straight man of the team endeavors to supply on time in full against the forecast the joker waits until the last few days of the month to sell anything including his granny to make the required number and secure a bonus. And thus, the cycle repeats again, and again, and again.

If you pump too much unwanted stock into the market sooner or later you will need to destock your distributors and/or International Key Accounts (IKA). Distributors have always been ripe for a bit of extra loading here and there to manipulate the sales figures but don’t fool yourself this does not happen with IKA. It does and with the modern power of IKA accounts you might find yourself with a very unwelcome stock return and a difficult to refuse request for compensation.

Frequently, when things go wrong in the market place the Sales people will chirp up with something like “that’s another nice mess you’ve gotten me into” as a prelude to their Teflon blame-storming.

S&OP requires a team effort to succeed as a process which will lead to better performance in the market place. No planning or forecasting process is ever perfect but a little more diligence and team playing from the funny man would bring immediate and lasting results.