Vuvuzelas and the value of S&OP

Posted by Dave Jordan on Tue, Jun 29, 2010
Suddenly, many companies in South Africa are grossly overstocked with red, white and blue Vuvuzelas! They will not be allowed at Wimbledon and even the cricket authorities would think twice. Skiing, possibly? There may be quite some capital tied up in these noisy plastic horns so let's take England as an S&OP case study.

The product development process went extremely well over a 2 year period involving lengthy travel to various European cities for meetings. The development process was completed on time with only one data loss which did not impact on the network. The brand value and popularity was greatly enhanced during this logistical challenge across Europe and into CEE. 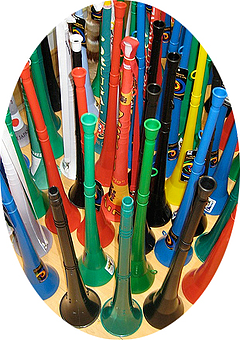 The format of the product range was moulded at an early stage with a fairly settled selection of SKU's. Inevitably, there was some debate about the wisdom of launching certain SKU's but the often used argument about the importance of specific sku's to the range was compelling. The management committed to revising the SKU list after a short pre-launch test market.

Various formulations were tested with some mixed success. The test market was deemed to have gone reasonably well; some adverse comments on performance but overall the product was good and deemed ready for launch roll out. A very late decision was taken on SKU rationalisation and prior to launch 7 SKU's were delisted and a group of 23 went into the launch phase. Despite a wobble in the test market the launch was expected to be a great success leading to huge demand for Vuvuzelas over the next 2 months.

The big launch! An American competitor appeared at the same time as the England product and in performance terms there was little to choose between them. There were a few negative signals but the Vuvuzelas kept streaming off the production line in anticipation of ultimate success.

The Vuvuzelas sang out as the England product came up against a vastly inferior North African model. Surprisingly this time there were serious failings with the England product and it simply did not perform well enough. The efficacy of a number of key SKU's was questioned with some people also questioning the Project Manager as he kept some useful SKU's off the shelf. Still, all the preparation was good so why should we lower the Vuvuzelas order? Everything will be ok.

The next test was to ensure superiority over a CEE offering to ensure England was rewarded with a gondola end display competing against the established brands. Success was achieved albeit without any major performance enhancement and the gondola end was secured. Get those Vuvuzelas moving off the production line, this is it, this is the real thing! Success in the market place after almost 50 years was assured, wasn't it? The Vuvuzela demand was raised once more as expectation grew about the impending global success.

Ok, onto the gondola end and directly opposed to a German range of relatively new and untried SKU's. The English SKU's were believed to be a premier product and which had certainly been assembled at great expense. From the development stage through test market the England product was deemed vastly superior to other models and the Vuvuzelas screeched out in support.

How wrong they were! Virtually all SKU's performed miserably both collectively and on their own. It was a sorry sight to see the German product gain 4 market awards to England's one. England claimed a second award was wrongly taken from them by the South American Mystery Shopper but it did not change the overall result. The England product was delisted and returned to the supplier.

By now the Vuvuzela factory was working 24/7 to keep the supply chain full. Even as the delisting occurred more and more Vuvuzelas were moving on trucks. What on earth are they going to do with all those England Vuvuzelas? Nobody wants them now.

The signals were there in test market but they were ignored under the marketing hype. The early market feedback raised further doubts about the certainty of success but again this was not taken into account in business planning. The notion that every single brand launch must be a success because marketing said so was highlighted as complete folly. However, don't blame marketing for the huge stock pile of Vuvuzulas. The signals were clear at a number of stages but those important signals did not get fed back into business discussions for future adjustments to be made.

As a result of failing to look at the harsh reality of market feedback, demand was continually over-estimated and the business left with a huge stockpile of squeakable plastic. Had a robust and interactive S&OP process been in place the production line could have been quickly changed to make gold Vuvuzelas which are certainly more durable!