I have spent some considerable time visiting medical facilities both at home and in UK and in the latter case I was not impressed. The National Health Service is still the envy of the rest of the world and rightly so. When you consider the policies and procedures in other countries the people who benefit from the NHS really should not complain about a 4 hour wait as you will be seen and you will not be asked if your bank card is contactless before you get to see a medical professional.

The NHS is struggling but I think that is partly due to people using the A&E facilities for an ingrowing toe nail or a stomach upset after a magmaloo curry (search that and Jasper Carrott) the night before. The strain on the service would be a lot less if treatment really was restricted to people who have bits hanging off and when life is under threat.

There is another area where the NHS struggles and that is on their supply chain. Yes, it is of course complicated; it is hard to demand forecast what accidents and illnesses will be wheeled through the doors and it is a supply chain that must deliver. Essentially everything should be available, everywhere at all times of the day in a non-stop operation. You cannot be out of stock on surgical sutures and make do with a bit of masking tape or ask the patient to "press firmly here" until replenishment arrives.

As a result, I saw horrendous waste on an hourly basis. Medicines, bandages, food (yes, I know it's not too clever anyway), utilities and perhaps most importantly, staff time and beds. At a time when the NHS is thought to be lacking beds I thought this was perhaps the most serious fault as waiting time for beds is high. Indeed, many non-urgent operations are cancelled as beds are apparently not available. Yet, beds were vacant and beds were still occupied by cured and dressed patients waiting for transport home. 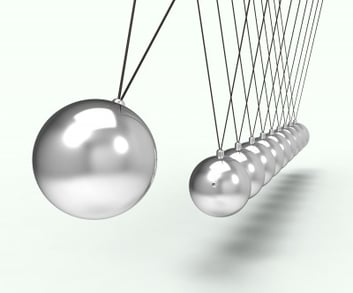 Drugs were delivered for people who had been discharged or even sadly died. Not one bit of this was deliberate but there appeared to be a frailty of planning. I am certainly not suggesting the operation of a 24/7 nationwide NHS is an easy operation to run but I do feel some of the waste listed earlier can be avoided but not by rigidly sticking to current practises and procedures. That clever bloke Einstein defined doing the same thing over and over again and expecting different results, as insanity.

I would be similarly insane to say all the problems can be solved easily but when I met with the equivalent of the Ops Director at one major hospital in an English city currently without any Premier League teams, I was rather shocked. There was tacit agreement that numerous problems existed and there was an understanding of the improvement suggestions I made but then she bluntly played the Einstein card. You can only advise the NHS IF you have previously advised the NHS. What? Surely that is a recipe for a rapidly downwards spiral of inefficiency leading to collapse. Think out of the box!

I believe the NHS could learn from industry and even correction of a few basic errors mostly linked to simple data and information flow could deliver substantial sums. In 2015/16 the NHS budget was £116 billion, yes 116 billion of our weakening pounds. That is a serious amount of money that is not being well spent in some areas, in my humble opinion.

I asked the Ops Director what her biggest challenge was and I expected the answer to be a secure electricity supply or clean water or drugs availability etc, but was just a little surprised to hear she gets the greatest grief from bosses when...... the entry barrier does not work on the visitor car park.