Supply Chains: Do you use data or information?

Who coined that irritating term “Big Data”? How did we get there without normal sized data, slightly larger data, chubby data and bordering on big data? People working in or associated with extended Supply Chains may seem obsessed by data yet data itself actually tells you nothing, absolutely nothing. Certainly, not a lot apart from the fact that something is being watched, measured or calculated. 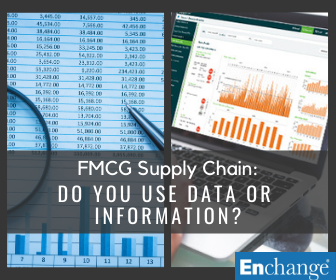 Firstly, a couple of daily life data/information irritations. Until recently, if you needed to renew your UK passport (remember when UK was in EU?), you had to have your identity confirmed by someone in a certain profession, e.g. doctor, teacher etc and be a person of “good standing in their community”. The allowed list of professions included Bank Officials which still baffles me after the way they have behaved over many years. Anyway, the signatory has to provide information confirming your identification and you get the passport. Information not data, gets the job done.

My bank writes to me – note, sends me a physical paper letter – asking me to confirm my address! “If you know where I live why do I have to call you to confirm what you already know?” TINA (There Is No Alternative) as Margaret Thatcher would say, so you have to bite your tongue and provide the information. Not data.

In extended Supply Chains the data obsession is growing. “Show me the data. How does the latest data look? Will the data protect my backside?” Data is only valuable if you know what it is measuring, what it actually means and what you need to do to change or influence that aspect of business performance. For data to be useful it must first be converted into useful information and then into appropriate and measurable actions.

I can see someone shouting at the screen “data is information isn’t it”? Well, no it is not and as the actor Sir Michael Caine insists he did not say, “not a lot of people know that”. People in all walks of life and business have a defective understanding of the differences.

Let us look at an example totally unconnected with Supply Chain. Due to some poor forward planning by the corporate travel department, you find yourself at 36,000 feet for the duration of a vital end of season English Premier League relegation battle. On leaving the comfort of the Boeing 787 Dreamliner you ask the first airport worker you see about the big game. All he/she can tell you is that there were 4 goals scored. Ok, that is good to know but is it helpful? What does this verbal exchange tell you?

Certainly, the match sounds like it was entertaining and not a bore draw but your overpaid wimpy English soccer idols needed a win. The data you have been given is 100% accurate but it does not actually tell you anything about the outcome of the contest. Was it 2-2, 3-1, 1-3 or even 4-0/0-4? You do not know.

When you finally understand the end result was 3 goals to 1 in favour of your team you are obviously elated. You think about kissing the moustachioed guy at the security desk but back down just in time – that metal detector wand could cause some serious damage. Instead of being as sick as a parrot you are over the moon, y’know what I mean?

So what is the message here? You have converted the raw data from the airport guy into information and then into actions. In terms of actions this means you have wisely decided against kissing the Village People security guard in order to head off to quaff several pints of celebratory foaming ale in the nearest bar. When you only had the overall 4 goals piece of data you had no idea of the actual scoring outcome, how you needed to react and what you needed to do.

The next time you are in an S&OP or similar meeting and somebody from Sales complains about a Customer Service level of 66% (or lower!) you need to ask for the valuable information behind that number. Then, and only then can you find out what went wrong and how to prevent or at least minimise, recurrence.