The municipality in Voluntari near Bucharest is not noted for its town planning excellence. Our local Silicone Valley of Str Erou Iancu Nicolae contains at least 11 education establishments. There should be no surprise at all that twice per day during school term time the road is gridlocked and even a nimble motorbike rider struggles to navigate the badly parked “Chelsea Tractors”. Someone even has a horrible pink 4WD. Pink! This could possibly be owned by Lady Penelope of Pipera.

Trailing only slightly behind schools is the number of supermarkets in a very small geography. Currently, we have 4 Mega Image (Delhaize) shops, 2 Carrefour Market, 1 Penny, 1 Lidl and 1 independent 24/7 outlet in the greater Silicone Valley area. If you look over one of the large walls along the road you can also see a Billa slowly rising from the mud just a few metres from a Mega Image on the opposite side of the road.

Do we really need all of this FMCG retail capacity? Pipera is not hugely populated so I think it is fair to say not all of these outlets will be sustainable. Without doubt not all of them will be profitable so at some time in the not too distant future we will see a couple dropping out of the race. Before that happens there will be the inevitable price war as the retailers try and defend volumes ahead of profit. Great news for consumers but worrying for retailers already under the discounter price cosh in Western Europe.

In UK at least, the discounters took some time to understand the shopping habits and attitudes of the UK shopper and in that time the usual big-name suspects continued developing out of town stores and internet shopping. Once the discounter threat became apparent they all opened new high street formats that made goods more locally available and also a cosy throwback to the good old days – 1960’s probably. 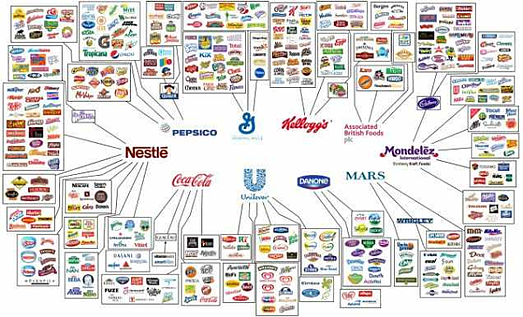 Now the discounters can see past those stiff upper lips they have really hurt the traditional retailers right where it hurts and as far as I can see they will continue to do so. How can the big names fight back? What can they do differently that they have not already tried? I have no doubt Tesco will recover from the accounting gaffe but I fear they will not reach the same dominant heights again.

Here is a thought. If all the FMCG giants are tired of retailers paying their invoices in 30, 60 or more days – with deductions - while the retailers themselves get most of their income in cash at point of sale, why not set up retail outlets? Unilever, Kimberly Clark, Heineken, Pepsico, Kelloggs and Mars, for example, could set up a supermarket chain that contains many of the worlds’ top brands in a largely complementary environment.

Slick supply chains could avoid retailer platforms where product is inevitably damaged, lost or both. The cost and frustration of transport queuing at warehouses or shops for an agreed slot which is hours overdue could be avoided. No more listing fees? Such producer shops would provide what consumers need rather than what retailers want to sell driven by margin or discount.

Maybe it is just too far-fetched but discounters cannot/will not support branded producer aspirations alone while the large chains flounder.