I recall laughing out loud when I was first exposed to FMCG BS Bingo – I leave you to work out what BS stands for. This game was designed for boring business meetings where people would pepper their comments and views with the latest buzz-phrases, e.g. blue sky thinking, unencumbered by the facts, bang for your buck and my personal non-favourite, touch base. When each buzz word was heard you crossed it off your list and when all the words had been used you were able to claim bingo or a full house of buzz.

Why do we seem to see more and more gobbledygook and unnecessary words and phrases in business? Why is simple English so rare and apparently inappropriate? Take a look at this business results announcement where I have deliberately disguised this culprit but it is based on an announcement from a household name.

“Closure of the second semester highlighted significant buoyancy in top and bottom line progress despite non-forecasted environmental resistance. Developing & emerging countries have experienced a further slow-down in momentum largely due to the latent threats of conflict and disease. This slumber has been exacerbated by the failure of developed markets to provide an expected modicum of growth.

"Nevertheless, we continue to stride ahead of our markets vectored by ground-breaking innovations in premium categories. Long term market sustainability investments have taken our top brands into the “sleeping giant” BRIC territories and other potential profit rich, atlas white spaces.

"Our newly focussed portfolio was modified through growth-themed acquisitions and overdue disposal of laggardly businesses. Costs remain under pressure but saving plans are primed to reach fruition in the next period being achieved primarily through a rationalisation of homosapien resources.

"The outlook remains challenging but we are confident of delivering impressive growth while enhancing core operating margin deliverance and a muscular cash flow.” 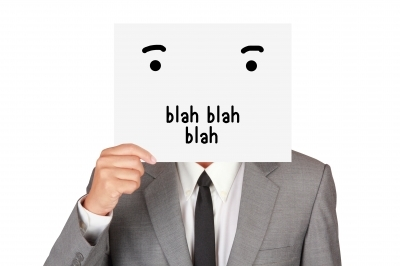 Such statements are then usually followed by an announcement of availability in Braille, large print and hard of hearing versions. What about being available in plain English? Ok, there is some poetic licence in that announcement but I am sure you get my point; when you need to say something why not say it simply, clearly and with a minimum of verbage? In that case maybe people will understand what you are actually stating or asking instead of trying to guess between the lies – no, not a typo.

I remember a training video from years ago where a Dutch guy talked about having “real” conversations with people. At the time I did not really get the point but I fully bought in when I was working in a factory in Jeddah. Direct, unambiguous conversations may be going against the British grain but they ultimately lead to a much higher level of achievement and success for both parties.

So, walk the talk, toe the line, get your thinking cap on and reach for the sky!