The human heart. Unless you are a little bit dead or a politician we all have one beating away inside. Thinking a little out of the box, what an excellent supply chain the heart is! Oxygenated blood is pumped through arteries around the body in just the right quantities at the right time. Depending on how you are exerting yourself more blood is pumped to specific areas to maintain strength, speed or whatever else you are up to…... De-oxygenated blood is then automatically sent back to the heart for a recharge before entering the blood supply chain once more. Perfect!

Which brings me to Tesco, that well known UK based but increasingly international retailer. In a presentation at the recent Integrated Business Planning event in London, Steve Strachota spoke about how the UK’s motorway network was vital in keeping stores well stocked from the distribution centres. With many stores opening 24/7 the need for reliable replenishment is critical to Tesco’s success. The days of a truck only delivering in the early morning before opening time are long gone.

The pressure on the supply chain is unrelenting and the M1 in particular was singled out as the main artery to keep shelves well stocked. Now, the UK motorway network is far from perfect and sometimes resembles a very large car park but it is well planned to keep all the major towns and cities linked. Barring hold-ups and sensible rest breaks you can drive the full length of the country in about 11 hours. That is about 600miles or just under1000km in new money.

Which brings me right across the continent to Romania. A while ago I helped drive a 7.5t truck from UK to Romania for a charity I support. Driving mostly on the wrong side of the road in the right side of the cabin was quite a challenge but by sharing the driving we managed to reach Oradea at the Romanian border in just over 2 days. Some 20 hours and 600km later we had reached Bucuresti. Of course, this would be faster in a car but we were driving a relatively small truck which many FMCG retailers and producers use to move goods. 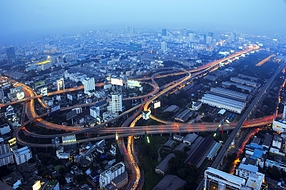 I am big fan of Romania and most Romanians but the road infrastructure still lets the country down. Several years on from entering the EU and petty politics, incompetence and corruption have made sure that not many km of motorways have been built. Yes, you can get closer to the Black Sea resorts now and there is a very slick motorway linking Bucuresti with Ploiesti but not much else. Romania has such a lot to offer and with low wage rates the country really should be host to much more manufacturing. In fact, some big name producers have already closed manufacturing facilities and taken their business elsewhere.

The Romanian road network needs urgent resuscitation before the low cost producer label is no more and producers move eastwards. FMCG Producers will not wait forever for the government to get its act together. Oh and before you ask, don't get me starte on the trains.

Image courtesy of samarttiw at freedigitalphotos.net