Supply and demand in Africa - it's a sport relief

Posted by Michael Thompson on Tue, Mar 25, 2014
If like me, you watched some of Sport Relief last Friday night, you may have been left with a number of emotions.

For those people outside of the UK not familiar with Sport Relief, it is a biannual event involving everyday folk, sports personalities and celebrities who take part in various events and challenges to raise money for charity. It culminates in an evening of television entertainment, the purpose of which is to raise as much money as possible for various causes in the UK and overseas including for needy children in Africa.

One of the more heroic contributors this year was Davina McCall. She swam, cycled and ran from Edinburgh to London in seven days - an ultra-triathlon. Her efforts alone have raised more than £2 million. 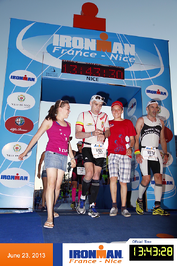 I can relate to Davina's adventure on a number of levels. Last year I completed the Ironman triathlon in France to raise money for the Tumshangilia School in Nairobi. My efforts pale in comparison of course.  However, I have some appreciation of the motivation, dedication, determination and ultimately immense satisfaction that she will have experienced.

So what has this got to do with supply and demand?
Everything in a world of inequality, need and poverty, I would argue.  Here is just one example - children's education.

Hundreds of millions of children right now do not receive basic primary and secondary school education.  The demand is certainly there as anyone who has visited a school in Africa will no doubt testify. And in Africa, children love their schools.

However this demand far exceeds the supply of schools and teachers. The issue of course is money, or lack thereof.

The solution? It lies in the hands of a small number of some of the world’s powerful and influential people. Perhaps if they had some of the motivation, dedication and determination of say Davina McCall, this particular imbalance of supply and demand would be corrected. And what immense satisfaction that would bring to all concerned.