Christmas is coming, the goose is getting fat and you might want to put a penny or even a Euro in an old man’s hat. Once again it is nearly time for a cynical Supply Chain Santa to distribute presents to the FMCG/Brewing/Pharmaceutical Board directors. Have they all been good this year? What does cynical Santa have on his sleigh for each of you? 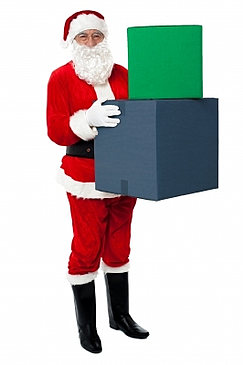 After dashing through the snow, cynical Santa arrives at the first house in a very trendy part of town. Who lives here? Yes, this is the very swish bungalow (think about that for a second) of the marketing director decorated with over 10,000 flashing lights. Squeezing down the chimney and out through the fireplace Santa finds himself in a warm, brightly lit room with a large stocking hanging on the door handle. Without making a noise, Santa opened his vast sack and took out 3 presents to leave in the marketing stocking:

Santa closed his sack tightly and climbed back up the chimney where Rudolph was ready to take him to his next destination. A short flight took them to a very neat area with houses all the same size and neatly arranged in regimented rows with postage stamp sized lawns.

With a larger chimney pot Santa was quickly inside the house and in a pleasant room with a fish tank bubbling away in the corner. Santa wasted no time in reaching into his sack and left three gifts for the Finance Director:

A spend restrictor for the marketing budget, ie a taser.

Up and away once again over the snow topped building, Santa flew to the really posh part of town. A very large house with 2 chimneys, a swimming pool and a boat in the driveway? This must be the CEO’s house but no, the Sales Director lives here.

Santa chose a chimney to wriggle down and entered a large room with beautiful furniture and all the latest electrical gadgets and appliances. What could you give to the Sales Director who has everything?

A mirror to look him/herself in the eyes after making a forecast.

An alphabet that does not stop at “I”.

The Guinness Book of excuses for failure to make the target.

After exiting via the second chimney in the room where the walls were covered in training course certificates, cynical Santa snapped the reigns and headed off into the icy cold sky.

Next stop was in an old part of town near to the industrial area. A ancient Citroen 2CV was on the drive and with solar panels across the roof of this address, Rudolf had to be careful not to cause any damage. A sign on the chimney listed a number of safety precautions and duly noting them, Santa slipped inside and soon had the presents neatly inserted in the Supply Chain Director’s stocking:

A warehouse with Tardis capability.

A full size artificial thick skin with a specially reinforced back to repel knives.

Leaving a pro-forma invoice with the presents Santa signed himself out of the house in the visitors log book and took to the sky once more.

Flying low across the rooftops Rudolph brought the sleigh to a halt in a part of town where every single house was exactly the same size, shape and beige in colour. Every house had cars that were beige and signs on the front doors telling a whole host of people and occupations not to knock or ring the doorbell.

As Santa was not yet on the forbidden list, he slid down the chimney and into the house of the HR Director. Working quickly as the dark of night slowly ebbed away, Santa dipped into the sack and left his presents:

A book, “Make yourself redundant and see how you feel”.

Another book, “How to erode terms and conditions by stealth”.

A massive ball of beige wool to pull over eyes.

Leaving in good time before any restructuring was suggested, Santa climbed aboard the sleigh once more and Rudolph took him to his final destination before daylight cracked open on another Christmas Day. 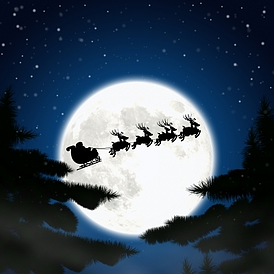 That final destination was the house where the CEO, partner and 2.5 children lived. This was a house not as large as the Sales Director but clearly comfortable and reflecting the seniority of the role. One last time Santa forced his way down the chimney and dropped in to the fortunately cold fire place. After a difficult year Santa left the CEO three gifts:

S&OP from Enchange – this would make the previous two obsolete, of course.

With all presents delivered, cynical Santa and red-nosed Rudolph took the sleigh back to the Christmas grotto garage where the elves prepared it for long term storage.

Do you think everyone will be happy with their presents? I think the Supply Chain Director might be but then again I am just a little biased!