That is an astonishing amount of food waste. Tesco in the UK has held its hands up and admitted it has generated 30,000 tonnes of food waste in the first 6 months of 2013. If that waste rate continues unabated it will reach an enormous 60.000 tonnes for the year. That is roughly the annual production volume of a decent sized food factory.

This refers only to Tesco so if you add in Asda, Morrisons, Sainsbury’s etc and the smaller retailers and assume a similar level of waste, the actual amount of goods produced but not consumed must be around 500,000 tonnes! Plus, that is just in the retailer’s possession, what about the food that ends up in millions of domestic rubbish bins?

If the same is true in other developed markets the figure wasted must be measured in millions of tonnes. Rightly, various organisations have spoken out about such excessive food waste when large parts of the global population struggle to feed themselves every day. 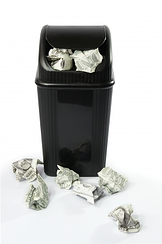 Shocking figures indeed but think about what that means for the UK foods business as a whole. Based on my rough estimation this tells us that half a million tonnes of food were produced to a high quality standard for top-notch retailers and they and the producers received no income in return. Yes, some contracts may pass the financial burden onto producers but whatever way you look at it the waste pyramid expands significantly when you take into account all associated costs.

When all those fruit, vegetables, bakery goods and more start rotting in the ground or feeding livestock what else goes with it?

Someone was paid to source and order the raw materials and packaging.

A truck was loaded and brought the RM/PM to the factory.

The goods were unloaded and stored in a warehouse.

Someone brought the materials to the production area.

Product was manufactured, packed and palletised.

Someone carried out relevant QA checks.

Finished goods were moved back in to another warehouse where they were stored before someone picked the pallet for despatch.

Once loaded on a truck the goods were delivered directly to a retailer or to a cross-docking platform.

Once at the supermarket the goods were unloaded into the back of store warehouse before finally reaching the shelf ready for sale.

All standard costs which will be included in COGS but they didn’t sell did they? So….

Someone had to empty the shelves and move the stock back into storage.

Someone had to pay for the storage and isolation of the stock.

Someone had to arrange destruction or donation or recycling.

A truck was loaded and took the goods to their final resting place.

As the quoted value of the wasted food is at the retailer level then it will include their lost margin but it does not show the full cost of failure to sell. Add in the disposal costs, promotional expenses, an untold volume of unaccounted telephone calls and endless paperwork/certification and the actual loss is probably even higher than these incredible published figures.

In an industry suffering from stalling economies these losses are not sustainable for bottom line and Corporate Social Responsibility (CSR) reasons. Sort it out!

Image courtesy of scottchan at freedigitalphotos.net