FMCG Retailing/Supply Chains: corner shops to out of town superstores

A couple of weeks ago senior management and I had to stay up late to collect the heiress and a very brave boyfriend from the airport around midnight. Unfortunately the low cost airline they were using did not live up to its speedy name and the flight was delayed by 2.5 hours. We were committed at that stage so no point in sleeping, what should we do?  We went shopping of course!

Now, 24/7 shopping is not new but it was not so long ago that the FMCG outlet network operated in a very different way, in the UK at least. Before the boom in out of town shopping centres the vast majority of FMCG products were sold in the local high street and mostly by independent traders. I can only recall Tesco, the Co-Op and perhaps Spar as having anything like a national network. Yes, I realiSe I am showing my age here.

These shops had rigorously defined opening hours which were usually 09.00 until 12.30 when they would close for lunch and then re-open at 14.00 until the shutters were back on again at 17.00. Where I lived in a quaint village called Birkenhead they did not open at all on Wednesday afternoons and many did not open on Sunday either.

Some archaic laws did not help as you had the crazy situation where you could buy a girly magazine on a Sunday but not a Bible! (Coincidentally, when In Vienna 2 years ago I found out it was illegal to sell paper products there on Sunday.) If you needed something and the shops were shut then you really had no option but to wait until they re-opened the following day as long as it wasn’t a Sunday! 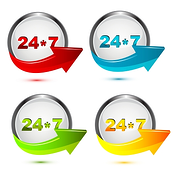 Supply chains or what passed for supply chains at that time were relatively simple with shopkeepers usually restocking from a cash & carry like Makro/Metro.

Spring forward a generation and you can just about buy anything you like at any time of the day and on any day of the week. I am not sure how many people do shop at 3am but it must be profitable as so many FMCG retailers keep their doors open permanently. With shelf off-take spread over 24 hours in any one day retailers need to have slick chains in place to move goods from their central warehouses right up to the shelf. FMCG Producers who deliver direct to stores or to retailer platforms need to be time flexible to meet the variable consumer demand.

Shops are open constantly and demand is usually greater at weekends so why do so many supply chains close down at 5pm on a Thursday or Friday, depending on where you live? While everyone needs a break isn’t there a competitive edge to be had from offering supply chain support at least every day of the week if not 24 hours a day?

Image courtesy of digitalart at freedigitalphotos.net