Back in the murky depths of time before the birth of humanity and Supply Chains, only dinosaurs roamed the Earth. Fighting and killing their way around the bubbling, steaming globe before an asteroid cut short their existence, allegedly. Sharks, crocodiles and the humble tortoise are just a few of the species that remain from that period in ancient history.

I can cope with the theory that the sharks and crocs were underwater predators, cold blooded and did not need the sunlight but what about Tommy the tortoise? Hardly the most threatening of creatures. Anyway, there is actually one dinosaur which still roams the planet in surprisingly high numbers. You would not recognise them as dinosaurs as millions of years of development and change have passed but nevertheless they walk amongst us. 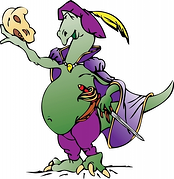 Many of the species have adapted to continuous change but others remain uncompromising, aggressive and lonely figures. No hunting in packs for this beast that avoided fossilisation and subsequent digging up with a small spoon and a paint brush by a man in a brown nylon kagool on day-time TV. I refer to the breed of autocratic and dictatorial Factory General Manager (FGM) – with emphasis on the “General”. I have reported a sighting only this week from within an FMCG/Brewing/Pharmaceutical business.

Nothing happens in their domain without the decision and direction coming from the FGM. All activities are focused on making the factory the slickest, cheapest and most efficient source for their product range. TPM, Lean, TQM and other initiatives are designed to continuously improve the factory operation and in many ways, rightly so.

What is wrong with this? Sounds like a standard approach? This is certainly what an FGM should be doing but the key element missing is internal customer service. All decisions are internally driven and not in support of the Marketing & Sales (MSO) activity. The MSO diligently develops a monthly forecast and a 6 month+ forward plan within S&OP but all that effort is then wasted as the factory does what it believes is right for the manufacturing operation.

If your company fails to attract and delight consumers then having a Rolls-Royce factory becomes irrelevant. And if volume drops substantially you could find yourself with a redundant FGM in a redundant factory.

The challenge and appropriate behaviour is to accept the plan as the best indication of what will happen in the market and then align the factory operation behind this. No, of course the MSO forecast will be wrong as it is really just and educated guess but by responding to the market demand rather than factory efficiency the company will have the best chance of in-market success.

Factories that continue to operate with a narrow minded, internally focused approach will soon end up alongside the dinosaurs.