SKU complexity, on shelf availability & the race for the White House?

I have tried to understand how the USA presidential election system works and even after several elections I still struggle.The last few months when it comes down to one against one is fairly straightforward but the earlier jostling for position is a Rubik’s Cube in the dark wearing mittens. On top of that the process seems to go on and on forever.  In fact, there is a huge business infrastructure in place just waiting for the end of the previous presidential race to start the next one and jostling is already taking place amongst the hopefuls to finally replace Obama. 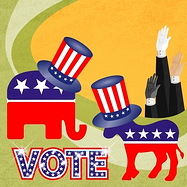 Who knew who would win the 2012 contest? I was not sure USA was ready for someone called Obama to be the President but did they really want a Mitt? What next, a Hank or a John-Boy?

The early jostling for position in the pecking order sees several keen unknowns from a variety of official parties and lunatic fringe groups putting their hands up for election.  Only one gets the chance to run head to head with the incumbent President or the opposition party successor.

With being incredibly wealthy or able to attract financial support being the base requirement, a number of aspects come under consideration:

Whether or not the chosen candidate has significant political experience, the ability to run a country is really a long way down the list.

If you have too many candidates facing off against the incumbent then you will dilute the vote and lose focus. If you propose a candidate with little appeal to the majority of the population, you will lose. If you find they are not of the right quality, you will lose. The opposition has one opportunity to present their candidate to the population and if a poor choice is offered you will be waiting for years for another shot. Voters cannot choose both candidates.

This early jostling is an sku (several keen unknowns…..?) complexity reduction programme. You consider who has the best chance of a return and you put your efforts behind that sku to generate the best possible chance of success. Skus that people do not want or are of insufficient quality or just financially non-viable should be taken out of your offering.

FMCG/Drinks/Pharmaceutical companies only get one chance to impress a consumer and provoke a signal from the brain to raise an arm to pick their product off the shelf. Get this wrong and you wait a long time for the next opportunity.

Cast your vote for an sku complexity review and improve your chances against the opposition.