The ancient Rolls Royce slowly chugged up the lane toward the big house. The thin wheels crunched at the white gravel as the car came to a halt opposite the imposing doors of the Abbey House. A full squad of staff in white and black livery was waiting patiently in the soaking rain to receive the guests for the weekend event. 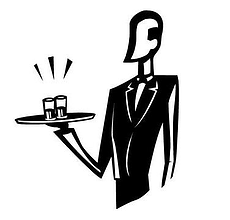 Carson, his hair even flatter to his head due to the rain walked forward with an umbrella to allow the two guests to avoid a similar soaking. Once greeted by the Earl and Countess the guests were fussily ushered inside to recover from the onerous journey while the maids and footmen emptied the car of far too many belongings for one weekend. How many hats can you wear in three days? Logistics complete; and the car chugged away out of sight.

Below stairs the Laurel and Hardy-like duo of Mrs. Patmore and Daisy started the gala dinner preparation. Daisy, perhaps the thinnest assistant cook in the history of period drama TV stirred a vast pot of near-boiling soup.  Mrs. Patmore had her hands hidden inside a voluminous brown baking bowl as a large mound of yellow-white dough was kneaded into submission. Meat and game dishes steamed and bubbled as the dinner bell approached.

Above stairs Carson and Mrs. Hughes marshalled the team as they carefully laid out the required cutlery and crockery demanded of such a fine dining experience.  The location of each and every piece was accurately measured and re-measured. There were no traffic light KPIs here as everything HAD to be perfect; there was no other option possible.

With an unnecessary pause for dramatic effect Carson scanned the room and then rang the bell to alert those above and below stairs that dinner was served. Soon a variety of family and house guests in seemingly uncomfortable clothes floated in and shared canapés and pre-dinner drinks. The chatter continued about the scandals of the day; what the Royals were getting up to, the latest society divorce and whether there was a future for electric telephones.

Guests ploughed through the early courses and then Lord Grantham himself decided to carve the main course meat dish. Task complete and very pleased with himself he called for Carson to serve some more red wine.  Carson moved to oblige but quickly realised something was wrong. The decanters were empty and he knew there was no more of the same wine in the wine cellar. Carson sweated and frowned but knew he had no option and whispered in Lord Grantham’s ear that the house was out of stock!

Lord Grantham glared at him with a face like a Bulldog who has just had his favourite bone taken away. How could this OOS possibly happen? The offer of white wine was rebuffed as you simply cannot drink that with red meat. With simmering rage Lord Grantham apologised to the gathering and instructed Carson to break out the vintage port as a partial compensation. Even the ladies were allowed to drink the port; it was that serious!

Carson was embarrassed and sheepishly retreated to share his out of stock moment with Mrs. Hughes. The Abbey Supply Chain had failed and Carson felt deep, deep shame.

However, privately Carson was fuming that the guests had quaffed 3 days of red wine in one sitting so how on earth can you insert that kind of planning spike into accurate demand? As Mrs. Hughes calmed his anger the dreamy music started and another hectic day at the Abbey came to an end.