Jeff: Oh, it’s the IATA code for The Hague airport where they send all the war criminals.

Jeff: What business is that then?

Mal: Well, any business really, like FMCG or brewing or pharmaceuticals.

Mal: ceuticals. Tablets, medicines and that sort of stuff. 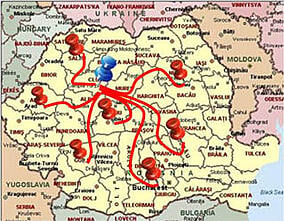 Jeff: So what about RTM, what’s it all about?

Mal; It’s the sharp end of the consumer industry - getting stuff onto shelves in shops.

Jeff: What sort of stuff?

Jeff: Ok then. What does RTM stand for?

Mal: No, not like a map. Well, yes like a map. It is how you get your product so that it is in front of consumers.

Jeff: What’s so special about that then? Everybody does it; even my little corner shop always has stuff on the shelves. Sounds like a lot of nonsense to me. Nothing clever.

Mal: Nothing clever? I’ll have you know that many big companies get it completely wrong. Don’t’ pay enough attention to it, see. They just assume what they do is optimum when in fact they are wasting time, effort and cash. A right mess, I can tell you.

Jeff: So, what can you do about it?

Mal: RTM. If they studied their Route To Market distribution network they would see their weaknesses and their strengths and then deploy resources accordingly. You would think that in a recession these companies would want to sell more.

Jeff: Why don’t they?

Mal: If only they spent a little time and effort on their RTM they would understand their problems and opportunities much better. Where are you going?

Jeff: I’m off to Patel’s corner shop to see how good this RTM is locally. This Route To Market thingy has got me worried and I must have my yellow M&Ms.